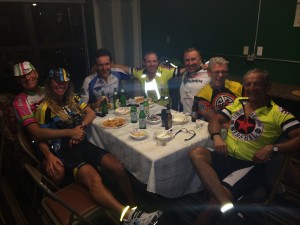 We are sad to report Jacquie Schlitter’s recent passing after her fight with cancer. Jacquie became a randonneur in 2011 and completed a full series that year, culminating in a joyous and successful, if somewhat sleep-deprived, Paris-Brest-Paris (a result of “Too many French cafés”). That little vignette, which she shared with me as we approached Villaines-la-Juhel, typified Jacquie’s awesome nature. Jacquie would be in the middle of doing something really tough, really extraordinary, and totally wiped out and yet there she was, despite being on the edge, with a huge smile on her face and not only having a good time, but spreading positive energy to everyone she came in contact with no matter who they were. Anytime you saw her pig-tails flying in the breeze (usually up the road!), you knew you were witness not only to one of the strongest riders ever to put a bike on the line, but to someone who knew how to have a great time and always supported others.

Several years later, Jacquie completed the infamous beer-and-wine-soaked loop-style 1000K we ran in October 2014 to gauge interest in such a route design. Would returning to the start/finish each night be too boring? Or would riders enjoy having a basecamp and starting each day together? Leave it to Jacquie to prove the concept of an event that emphasized camaraderie (see above, taken after Day 2). The ride and route design were huge successes in no small part thanks to Jacquie and John whose enthusiasm for ultracycling and sharing its joy with others were positively infectious. Jacquie completed the 2016 Cracker Swamp in the same grand, enthusiastic style.

Jacquie, we sorely miss your spirit, your speed, and your hugs. May all your roads from hereon out be freshly paved and the wind forever at your back.